七首詩和一些耳鳴
7 Poems and Some Tinnitus

HSIA Yu is a legend in Taiwan’s poetry scene. She has been one the most influential figures of youth subculture for decades. Under pen names such as LI Gedi, she has also been one of the top lyric writers in the Mandarin pop music scene. She publishes her poetry exclusively on her own independent label and almost never shows up at public events.

YAN Jun is a Beijing based musician and poet. As a music critic in the late 90s and early 00s, he was a key figure in China’s underground rock scene. Since the early 00s he has been working on the margins of music with field recording, voice and electronics.

In 2011, Hsia Yu and Yan Jun recorded their first material together at Hsia’s flat after a living room concert performed by Yan. They promised one another to make an album together. After several years of slow and loose brewing, here is the result.

There are no reviews yet. 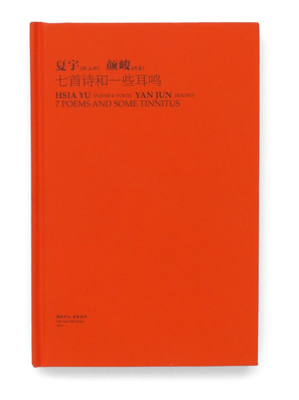